I’m a former ballerina, and I was one of the only minorities in a studio that was predominantly, overwhelmingly, white. Ballet, as a cultural sphere, is particularly exclusionary in a way that is both obvious (the high price of this hobby) and hard to pin down. Perhaps it’s the subtle, often insidious atmosphere of a discipline that prizes certain bodies and certain aesthetics above all others. In a medium so focused on the visual body, the importance of seeing role models who look like you cannot be overstated. Small wonder, then, that seeing Misty Copeland as Odette/Odile in Swan Lake has lit a fire in young ballerinas of color everywhere. Misty’s success is a vivid reminder of black excellence in a field that hasn’t quite been welcoming to women of color.

The ballet world and beyond has been dazzled by Misty Copeland’s rise to fame—from the cover of dance magazines to a giant ad in my local Dick’s Sporting Goods, her face is everywhere.

I’m a former ballerina, and I was one of the only minorities in a studio that was predominantly, overwhelmingly, white. Ballet, as a cultural sphere, is particularly exclusionary in a way that is both obvious (the high price of this “hobby”) and hard to pin down. Perhaps it’s the subtle, often insidious atmosphere of a discipline that prizes certain bodies and certain aesthetics above all others. In a medium so focused on the visual body, the importance of seeing role models who look like you cannot be overstated. Small wonder, then, that seeing Misty Copeland as Odette/Odile in Swan Lake has lit a fire in young ballerinas of color everywhere. Misty’s success is a vivid reminder of black excellence in a field that hasn’t quite been welcoming to women of color.

But she’s not the only one. As Theresa Ruth Howard argues in her piece “The Misty-Rious Case of the Vanishing Ballerinas of Color: Where Have All the Others Gone?“, an overwhelming focus on Misty as “the first one,” “the only one,” the “ultimate” trailblazer actually erases and diminishes the many dancers who helped shape the path that Misty now dances. To elevate Misty and forget her predecessors (and peers) would be to commit the fallacy of the “only one”—the flawed assumption that, for women of color and black women in particular, there can only be one in the top spot. It’s time for classical ballet, an art form with diminishing mainstream cultural resonance, to open itself wider to the passionate dancers of all backgrounds waiting in its wings.

Ballet is an especially interesting cultural arena because of the conversations surrounding black women’s bodies. Black women, like most groups of women of color in the history of the United States, have been both oversexualized and instrumentalized. Mainstream pop culture’s appropriation of black dancing (see: twerking) while simultaneously denigrating the same black women who originated this facet of culture—that’s a telling example of the double standard to which black women’s bodies are held, isnt it? Ballet, despite its claim to artistic purity that rises above politics, is not immune to this. It is an art form about looking at bodies on display, about profiting from the bodies of girls who work themselves sometimes to exhaustion. But it is also about beauty and joy and the sweetness of struggle. These are not irreconciliable. As ballerinas of color take to the stage, they inevitably participate in a cultural sphere that does not always respect or value them—but they also work to carve out a space for themselves and for the craft they love. That is beauty.

This gallery pays tribute to Misty and her fellow ballerinas of color: those who shone so brightly on stages all over the world and inspired the next generation of dancers. For a fuller list of black ballet dancers, please visit Roll Call.

This extremely brief introduction is by no means an exhaustive list (not even close!) I have intentionally focused on black ballerinas because in the fraught racial history of the United States, black ballerinas have been forced to overcome more explicit color barriers than most other groups. This is not to diminish the achievements of other women of color—another post about them is forthcoming! If you have suggestions, please share your favorite ballerinas and dancers of color, trailblazers all, in the comments. 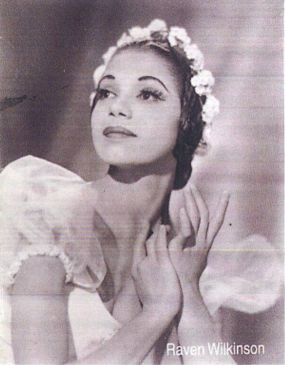 An oft-cited mentor of Misty Copeland, Raven Wilkinson was a trailblazer who danced with the Ballet Russes at the height of the racial violence and upheaval of the 1950s. After spending most of her career with Ballet Russes battling racism in the segregated South (even encountering the KKK on multiple occasions), she left the company and danced with the National Ballet of Holland for a number of years. More on her here: http://www.washingtonpost.com/news/morning-mix/wp/2015/07/01/misty-copelands-mentor-the-courageous-black-ballerina-who-defied-racism/

Janet Collins, 1917-2003, broke many color barriers and lived to see almost an entire century of dance’s evolution. From the African American Registry (http://www.aaregistry.org/historic_events/view/janet-collins-prima-ballerina): From New Orleans, Louisiana, she moved with her family to Los Angeles as a young girl, attending Los Angeles City College and the Los Angeles Art Center School. As an accomplished painter, she was able to finance her relocation to New York to pursue a career in dance. In 1941, she performed with the new, but world-renowned Black dance troupe formed and directed by Katherine Dunham. At the age of fifteen, Collins successfully auditioned for the Ballet Russe de Monte Carlo at the Philharmonic, but after being told she would have to paint her face white to perform, she declined the offer. Having told her aunt what happened, she was advised, “You get back to the barre and start your City exercises. Don’t try to be good, be excellent.” In 1949, Collins made her New York debut in a solo concert. As a prima ballerina in 1951, she became the first Black artist to perform on the stage of the Metropolitan Opera House in New York. Starring in the 1951 production of Cole Porter’s Out of This World, Collins won the Donaldson Award, signifying the best dancer on Broadway. She remained with the Met until 1954, dancing in Carmen, Aida, La Gioconda, and Samson and Delilah, after which she toured the United States and Canada in solo dance concerts. Having taught at several colleges and dance institutions in New York and California, she retired and resided in Seattle. Janet Collins died in June 2003 in Forth Worth, Texas. 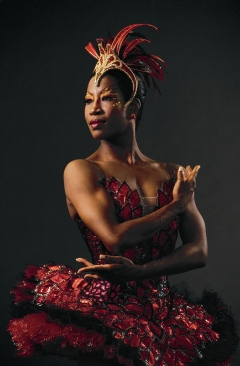 Though not a classical ballerina in the strictest sense, Katherine Dunham was a wide-ranging and groundbreaking figure in the dance world. From the African American Registry: Born in Chicago, Dunham received her bachelor’s, master’s, and doctoral degrees in anthropology from the University of Chicago and later did extensive anthropological study, particularly in the Caribbean. She began performing in 1931 in Chicago and then worked for the New York Labor Stage, where she composed dances for “The Emperor Jones,” “Pins and Needles,” and “Run, Li’l Chillun.” In 1936, Dunham received a Julius Rosenwald Foundation fellowship, with which she traveled and studied dance in the West Indies, particularly in Haiti. In 1940, she formed a highly acclaimed all-Black dance troupe that toured her works in the United States and in Europe. She also choreographed for, and performed in, motion pictures and Broadway musicals. Dunham opened the Dunham School of Dance in New York City, which trained dancers in classical ballet, African and Caribbean dance forms, anthropology, and other cultural arts. The school was an influential center of Black dance. She became the first Black choreographer at the Metropolitan Opera in New York City.

Virginia Johnson is the current Artistic Director of the Dance Theatre of Harlem, and has been at the helm of its revival after serving a long and brilliant career as one of its prima ballerinas. Alongside the Theatre’s founder, Arthur Mitchell, she has worked to advance the Dance Theatre of Harlem as an incubator of black ballerinas and dancers worldwide. The company is a crucial link between the past and present of black dance. From an interview with dancetabs.com (http://dancetabs.com/2013/09/virginia-johnson-artistic-director-dance-theatre-of-harlem/) : When she graduated from the Academy of the Washington School of Ballet, in 1968, she was the only black student. Her teacher and mentor, Mary Day, advised her to look into opportunities in modern dance because it was unlikely – or, to be honest, practically impossible – that any ballet troupe would take her. Johnson’s hometown, Washington D.C., was being torn apart by race riots brought on, in part, by the assassination of Martin Luther King. It was a lot to think about, but she didn’t let it faze her. Johnson went to New York and, almost before she knew it, became a founding member of Arthur Mitchell’s exciting experiment, a ballet company based in Harlem. A place for black American ballet dancers to dance. She immediately became one of its top ballerinas – many would say, its prima ballerina – dancing roles as diverse as Sanguinic in Balanchine’s Agon, Blanche DuBois in A Streetcar Named Desire, Giselle, and the lead in Glen Tetley’s Voluntaries.
And the future? It might look like rising star Michaela DePrince, one of the subjects of the ballet documentary First Position. She is now dancing in the company of the Dutch National Ballet. Here she is at the young age of 14, competing in the Grand Prix. Check out her TED Talk too!

One thought on “Women of Color in Ballet”