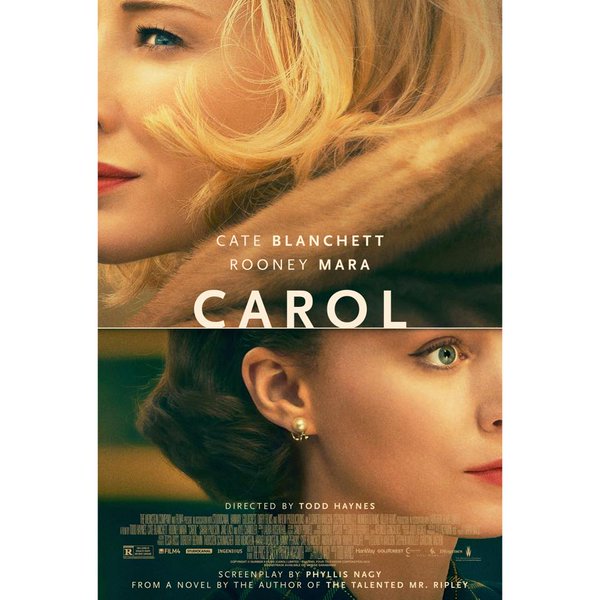 What does falling in love look like? As Todd Haynes’ film Carol reminds us, it often looks quite boring, looking from the outside in. Lives are brought together and broken apart in the most ordinary of settings—a rather depressing department store, a diner where the porcelain is thick and ungainly, a motel with ugly bedding. People with beautiful cheekbones and deep, startling gazes must still remember to pay their coffee bill and deal with traffic.

In some ways, not much happens in the movie. Two women meet in 1950s New York, exchanging glances and a joke or two over a toy counter. They fall in love, suddenly and without warning. One of them is Carol Aird (Cate Blanchett), the kind of woman who matches her coral lipstick to her nails perfectly, the better to veil her repression. The other is Therese Belivet, an aspiring photographer who shies away from others (Rooney Mara). What ensues? A couple of visits, a road-trip to flee Carol’s estranged and pushy husband Harges (Kyle Chandler), sex, and finally, a confrontation that sends them spinning away from each other and then back again.

In other ways, the stakes of the film are much higher. Vibrating underneath these events is a tension more meaningful than a shared cup of coffee or kisses exchanged on a motel pillow. In an era that could not brook the love between two women, or even call it by its name, Carol’s struggle to fit both her family expectations and her personal needs into a single life is a bitter one. She and Therese strive to fully realize their desires and selves. From the 1950s until now, that struggle for the right to occupy mundane space, even peacefully and beautifully, without intrusion and judgment, can ring true and familiar.

Patricia Highsmith’s 1952 novel The Price of Salt, the source material for the film, was long considered a literary footnote—after a surge in popularity at the time of its publishing, it fell to the wayside. It was, in fact, daring and important in many ways. Not only did it take lesbian love as its central theme, it broke the convention of “lesbian pulp fiction” to give its lovers a happy ending and a modicum of hope. The Price of Salt also precluded that other famous love story of the 1950s, Lolita, in its use of transgressive sex and the open road to explore the morality of American sentiment and loneliness. Both versions of the story celebrate the seemingly small but in fact monumental choice of self-satisfaction in the face of censure. In Carol, the driving force of a beautiful love story unfurls, whisper-soft but sweet.